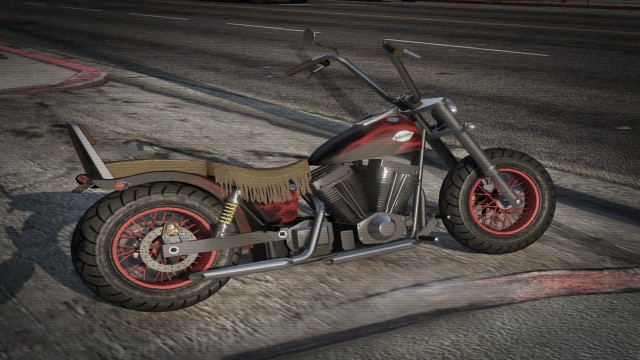 (Pictured: Djcool132132132's Dameon)
This is the Executive Bike.
-It is only available to those higher than Lieutenants (with some exceptions).
-Unlike the other bikes, the Dameon has Ape Hangers.
-It boasts acceleration and handling superior to any other bike in the game.
-It is based on a 1975 Harley Davidson Sportster. 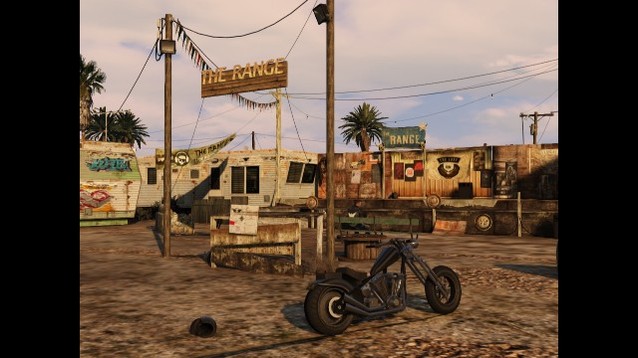 (Pictured: CommunistApe's Hexer, at the Lost MC Clubhouse)
-It's top speed and off road capabilities are superior to any other bikes in the game.
-It spawns frequently, both parked and driving anywhere the Lost MC can be seen.
-It is the only Lost MC bike that must be purchased ($15,000) in order to be put garaged.
-It is based on a West Coast Choppers CFL. 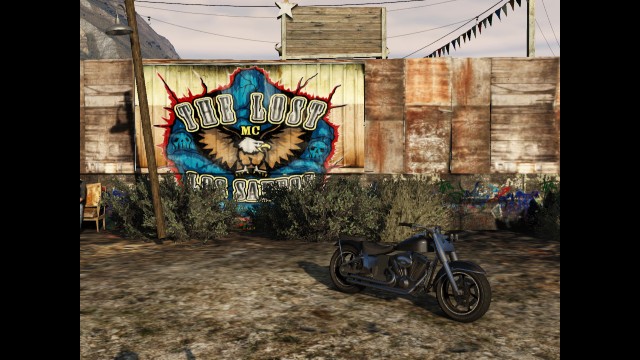 -It is a "cruiser" bike- it's smooth, but slow as shit.
-It is the most durable, and customizable bike in the game.
-It is based on the 2013 Harley Davidson Touring Road Glide Custom. 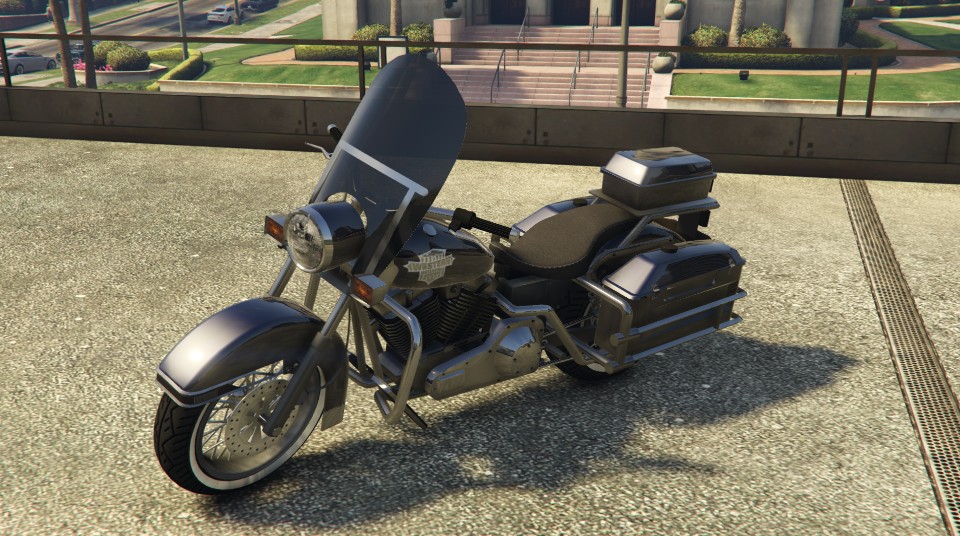 ​-The Sovereign shares many traits with the Harley Davidson Road King.
-The body style of this bike is a “Road-cruiser”
-This version of the Sovereign is modded
-You cannot change the American Flag Theme off the bike 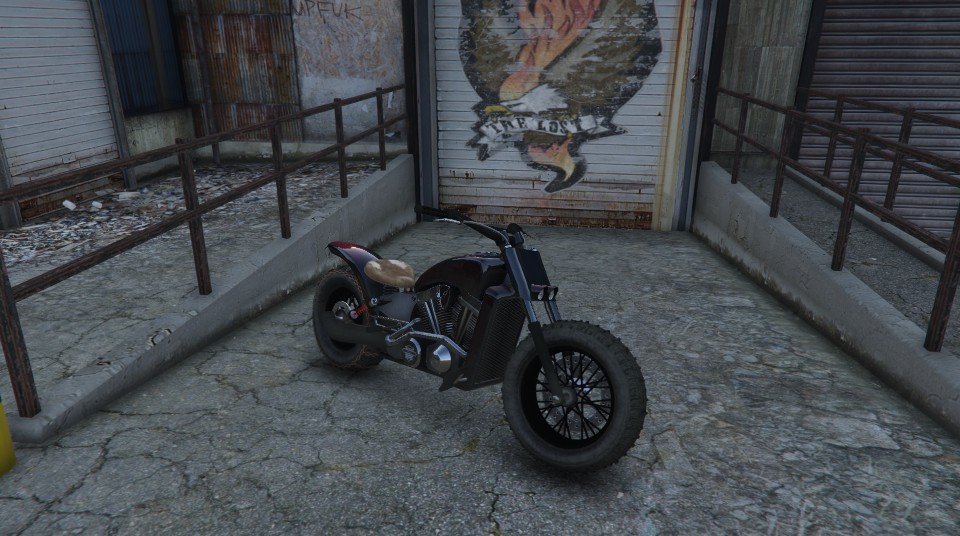 
-This vehicle appears to based on a 1928 Indian 101 Scout that has been modified into a hill-climber
- It comes with off road type as default, with the rear wheel of the vehicle being unique as it is wrapped in bike chains
-a typical trait for hill-climbers 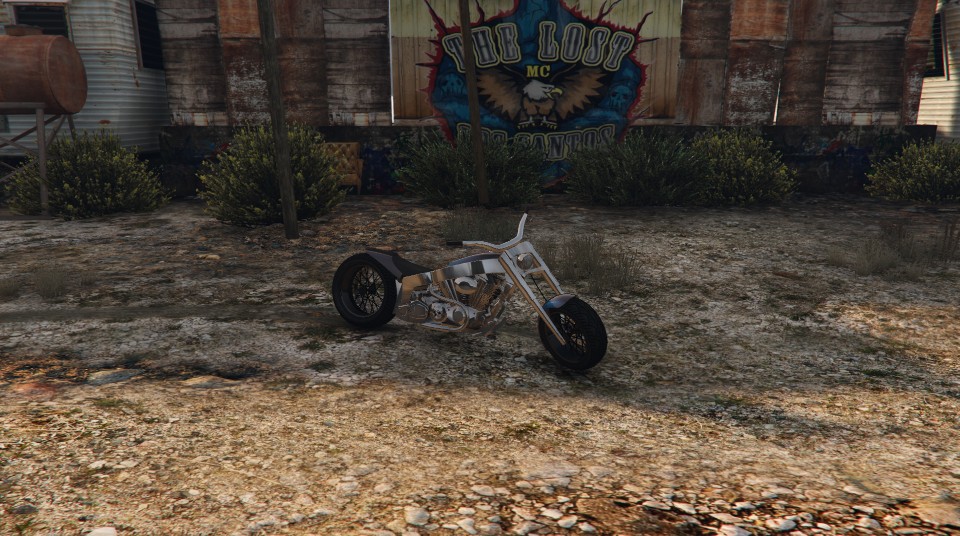 .
-The handlebars and headlight are inspired from the Harley Davidson Breakout.
-The vehicle also features an elaborate tribal paint job which incorporates
-This is also an modded version of the Innovation
-The rims are unchangeable 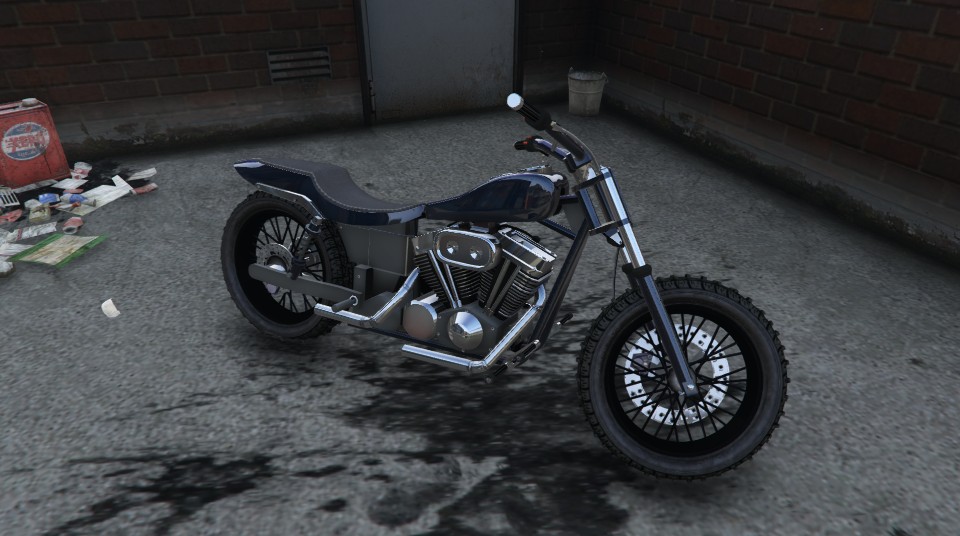 This vehicle is based on the Harley Davidson XR-750
-evidenced by the overall design and purpose.
-This bike in particular has amazing speed
-Great for offroading and riding into a war 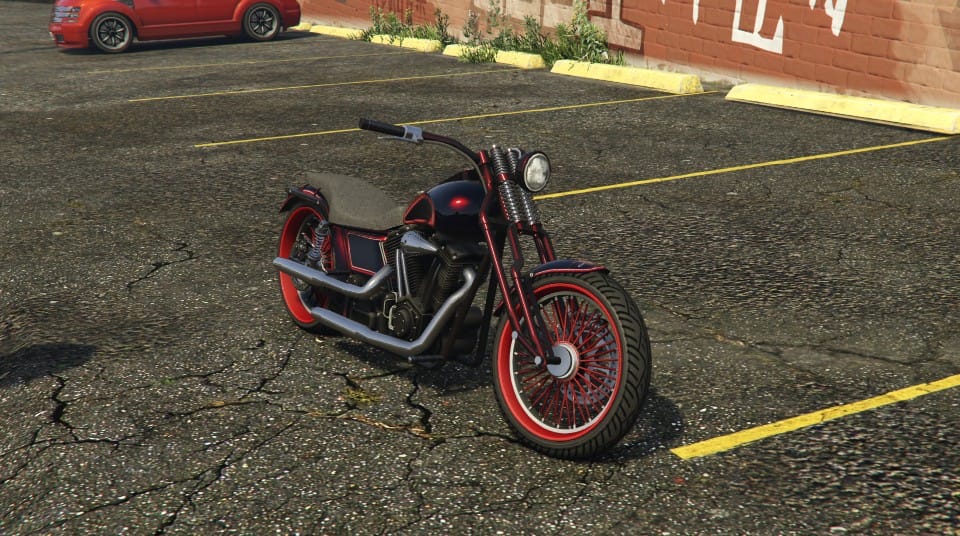 ​​-The motorbike is based on a Harley-Davidson 1200 Custom
-Style: Chopper
-Originally an Angels of Death bike but everyone in the club is allowed to ride
-More of a cruiser chopper like the Western Bagger
-Good for rides 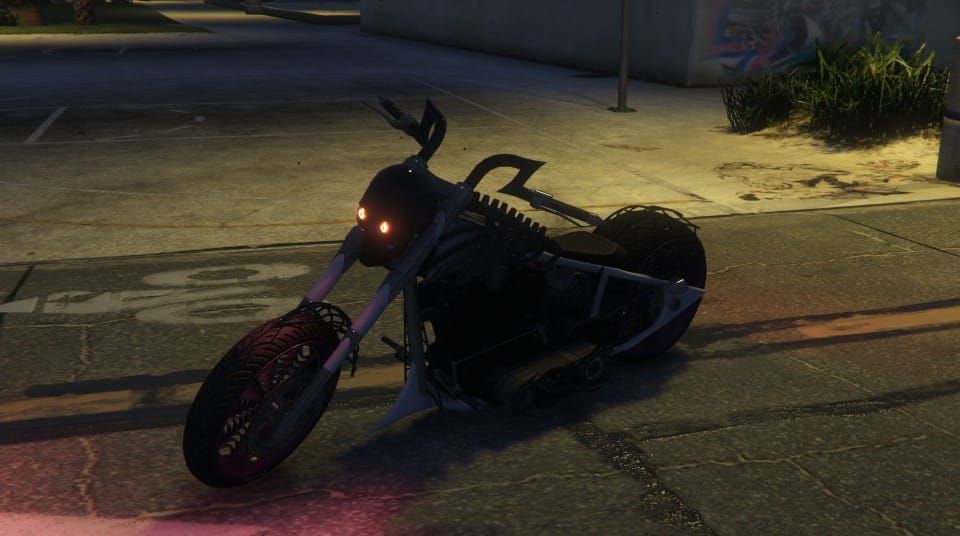 ​-This is an Heirarchy bike
-Style:Chopper
-The base version is the Avarus
-This bike has really impressive speed but poor movabililty 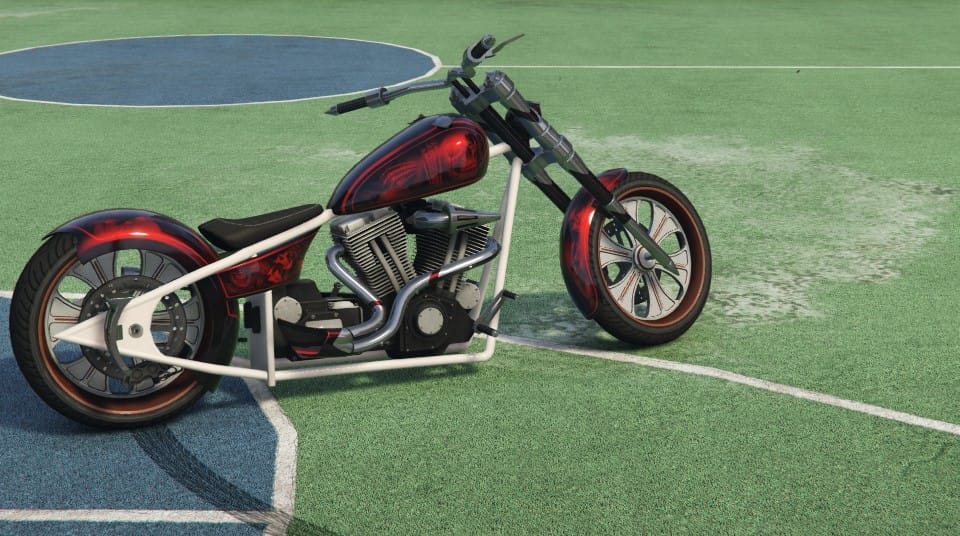 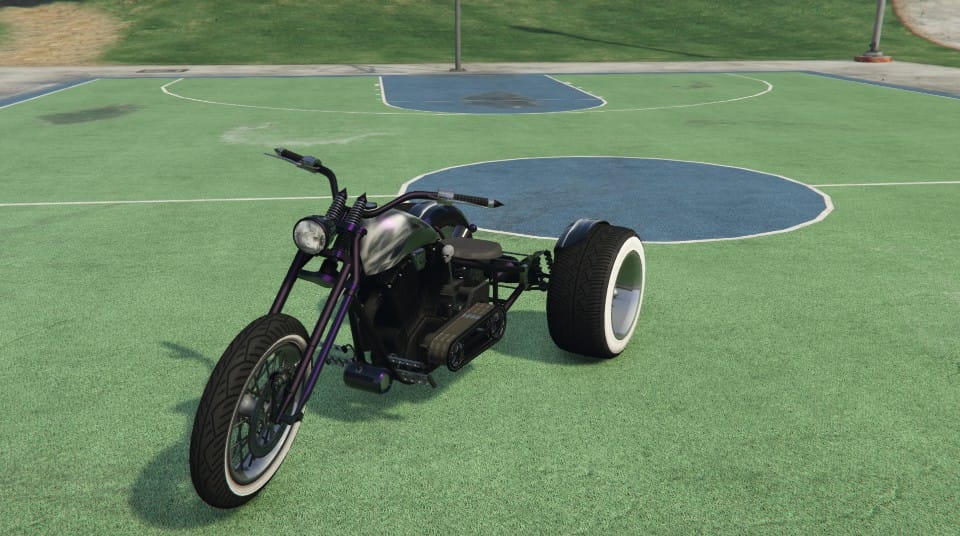 (Pictured: StiII Brazy)
​-The design is purely custom and does not reflect any real life manufactured tricycle, however it has similarities to real world custom tricycles.
-Very fast for its style of bike
-Style: Chopper Style Tricycle 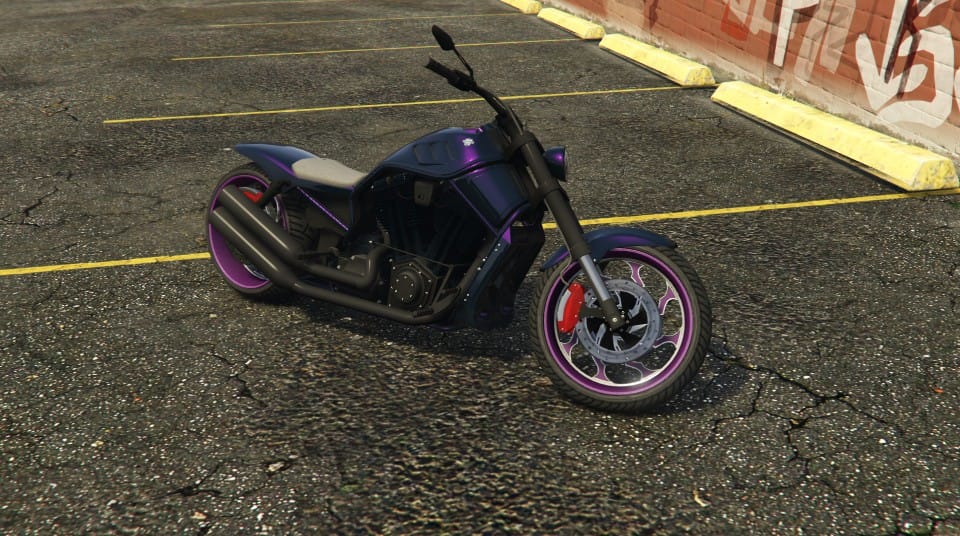 -We do not recomend this bike because its more of a street bike but its your choice to ride it
-The Nightblade appears to be based on an 2017 Night Rod Special
-Style: Chopper/Cruiser 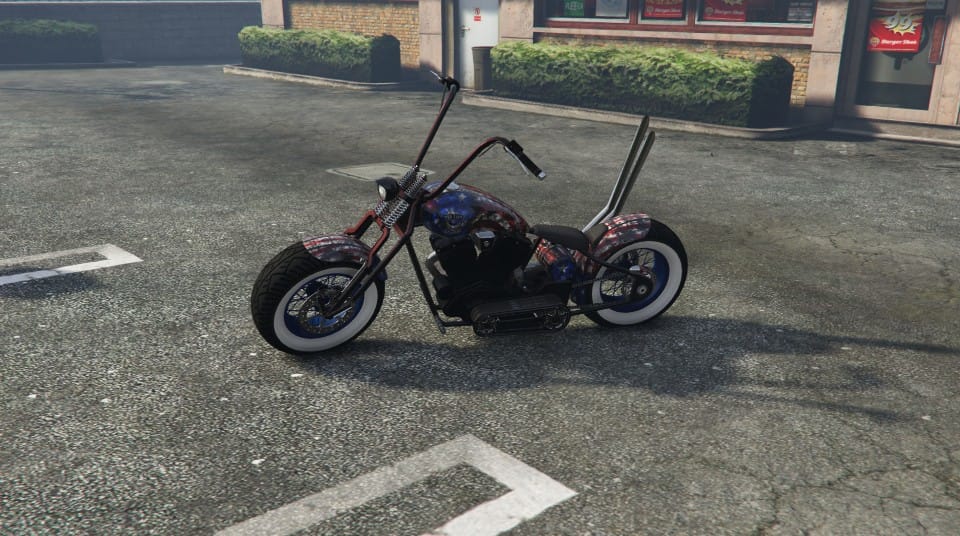 -The Zombie Bobber is, as the name suggests, a bobber variation of the Zombie Chopper, which has a front girder design and springer front end, as well as a single circular headlight
-Style: Chopper
​-Zombie Chopper and the rear fender is much shorter in appearance, as well as a different seat and exhaust pipes. 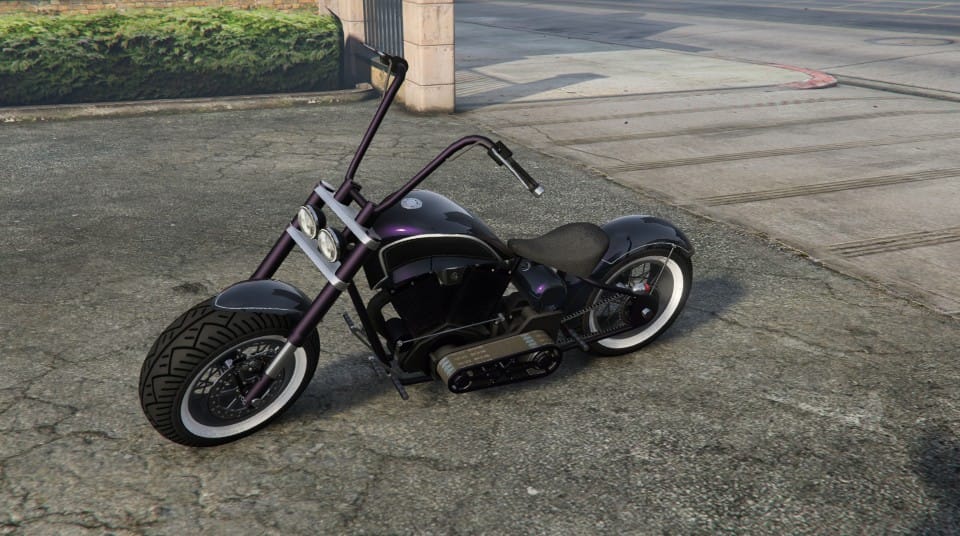 -The Zombie resembles a Harley Davidson Fat Bob Custom with a rigid body frame, as evidenced by the lack of a separate rear suspension module.
-The back of the bike is taken after a Harley Davidson Iron 883 with the fender and 2 tail lights.
​-Style:Chopper 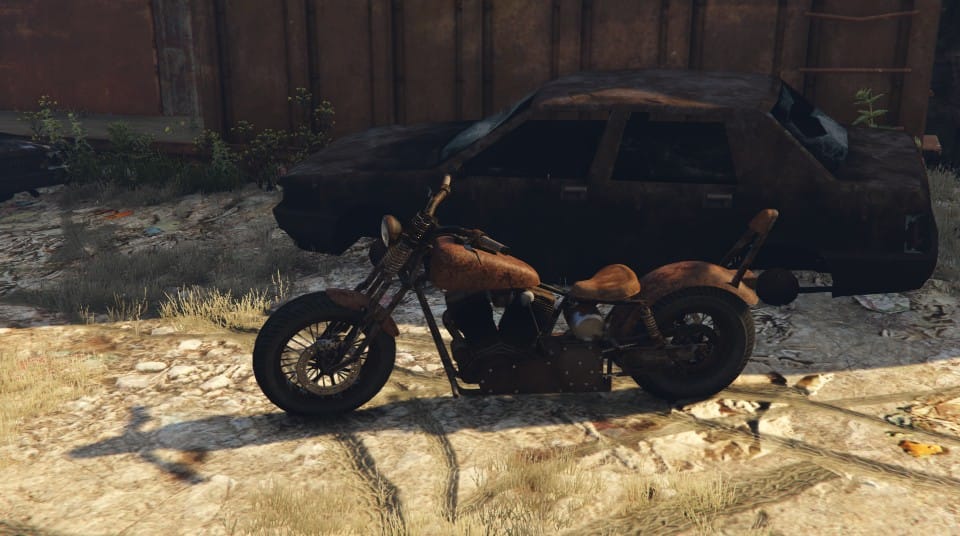 (Pictured: StiII Brazy)
​
-The Rat Bike's appearance is based on the Harley Davidson KKF 14, seen particularly in the front girder design and springer front end, the primary drive, front sprocket, brake rotor and caliper, as well as the large V Twin engine

-It shares the same real life design influence with the Wolfsbane (the Harley Davidson 1200), and is essentially a rusted variant of this vehicle.

The All Purpose Vehicles

These are the All Purpose Vehicles.
-They are used mainly as Assassination and Memorial Vehicles.
-There sometimes doubles as War Vehicles, and are also used to drive to meetings.
-Each Principal Member owns their own versions.
-The Dundreary Regina: 1968 Ford Country Squire / Oldsmobile Vista Cruiser
-The Declasse Burrito: 1997 Chevrolet Express

These are the official Lost MC Pickup Trucks.
-They spawn occasionally at the Lost MC Clubhouse, as well as around Blaine County.
-They serve mainly as War vehicles, as well as getaways, since their tires allow them to off-road.
-Most Principal Members own their own versions.
-The Karin Rebel: 1995 Toyota Hilux.
-The Bravado Duneloader: 1938 International Harvester

These are the official Lost MC War Vehicles.

-The Miabatsu Mule: A massive panel truck with a suprisingly high top speed.
a. It seats two in the front, but with the back doors you can cram in an entire lobby.
b. Its massive amount of rear storage space and durability makes it the perfect war vehicle.
c. You can purchase it off the computer for $27,000.
d. It is based off the 1994 Mitsubishi Fuso Truck.

-The Declasse Rancher XL: A extended cab SUV with a turbocharged V8.
a. Unlike the other war vehicles, it only seats four.
b. Its quick acceleration and top speed make it a good vehicle for drive bys, & free mode wars
c. The North Yankton Police have their own version.
d. It is based on the 1990 Chevyrolet Suburban.

-The Zirconium Journey: A rusted out, Class A Motorhome.
a. It seats only two, however many others can safely stand on the roof without falling.
b. It sports above average handeling and top speed, and can take a suprising amount of fire.
c. You can purchase it off the computer for $31.000.
d. It is based on the (shortened) 1975 Vogue Villa Grande.